×
You are here: Home / Cakes / Passionfruit and Raspberry Cheesecake

When you think of the ultimate crowd pleasing dessert, Cheesecake often comes to mind. But If you want to please AND wow your family and party guests, this easy Raspberry Passion Fruit Cheesecake with Speculoos Crust recipe is for you!

Why we love this recipe

Cheesecakes were never one of my go-to dessert growing up. You don't typically find cheesecakes in traditional French bakeries, and the only recipe I was accustomed to was my grandma's Eastern-European style baked cheesecake.

But this was until I spent a year in the US in 2008 and was brought to "The Cheesecake Factory". I'll stop you right there - their cheesecakes were way too heavy and sweet for my taste and this recipe will be nothing like theirs. But that year abroad introduced me to the light, creamy, flavourful cheesecakes!

And yes - baked cheesecake can be just as light, creamy and fluffy as no-bake cheesecakes! Just like my Baked Ricotta Cheesecake and my Biscoff Cheesecake, this Baked Raspberry Cheesecake with Passion Fruit is light, packed with flavour and super decadent!

Even though Cheesecakes aren't something I often make, I decided to work on a recipe after finding Speculoos biscuits in Melbourne. If you are wondering what the hell is a Speculoos, it is also known as "Biscoff" in many parts of the world.

It is a traditional Belgian / Dutch spiced cookie that I grew up with. When you order a coffee at a cafe in Brussels, it will most likely be served with a Speculoos cookie.

It is also commonly used to make cheesecake crusts, quite similarly to a Graham Cracker. But the spices used in Speculoos - mainly cinnamon -  really bring an intense and interesting flavour that you cannot find anywhere else! And it just works AMAZINGLY in cheesecakes!

I highly recommend trying to find the Speculoos Cookies for this recipe (and also because they are simply delicious) or you can get them here. Instead, you can also use Gingerbread Cookies or Graham Crackers. Not the same, though!

After working out the crust recipe, I decided to flavour the classic Cheesecake batter with Passionfruit. I absolutely love Passionfruit; it's sweet and sour at the same time, and the seeds brings such a nice crunch!

I thought it would be a really fun way to naturally bring texture to the Cheesecake batter. And because it seems that I cannot focus on one, simple recipe, I chose to make a Raspberry Swirl to decorate the cake. I find that Passion Fruit and Raspberry work really well together as they are both relatively tangy and crunchy!

To finish this Cheesecake, you can also make my 3 Ingredients Raspberry Sauce to pour over each slice!

For this Passionfruit and Raspberry Cheesecake recipe, you will need a classic Cheesecake Tin. I always recommend using a Springform Pan instead of a traditional cake tin, as I explained in my Peach and Almond Olive Oil Cake recipe.

The tin I used was quite large so the Cheesecake turned out relatively thin, but you can simply use a smaller Cheesecake Tin to create a higher cake. Only keep in mind that the cake will probably need to bake for longer if higher! 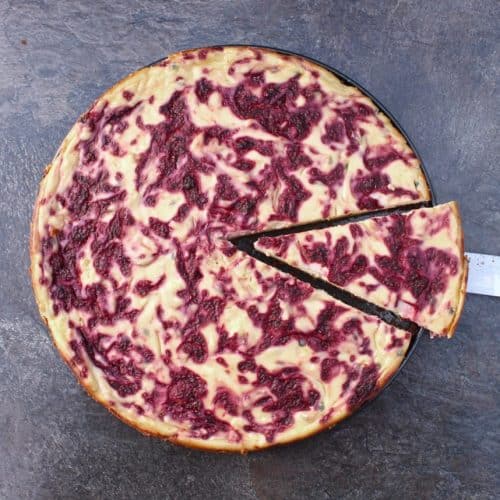 Tried this Recipe? Take a photo and Tag us on Instagram!Mention @a.baking.journey or tag #abakingjourney!

Hi there! I'm Sylvie, a Belgian Expat living in Melbourne, Australia. I am a passionate Baker who loves to share her favourite recipes and baking tips.
Join me on my Baking Journey!